I am currently writing this on Wednesday, as I am already out of the tournament since 11:00 AM this morning. Although it is a very possible situation to be out of a tournament this early (i.e. losing first round), the difference this time was that I have already finished 3 matches, scheduled all within 24 hours. Even at my University, there was a specific protocol for ‘exam hardship’:

An examination hardship is defined as the occurrence of an examination candidate being faced with three (3) or more formal examinations scheduled within a 24-hour period (e.g., from 8:00 a.m. to 7:59 a.m. the following day).

The solution to this problem is that one exam will be rescheduled, and who knows how things might have turned out if I had an extra day or two to prepare?

Regardless, there is very little what I could have done then, and possibly even less I can do now after my matches are over. Alex has one more match in the WD, which was scheduled very nicely, with a single match each day. It’s definitely frustrating to have these things happen, but since I can’t do much about it, perhaps it’s best to let things go.

Our matches went fairly well, but again, I wish I had a little more time to prepare. We took China to 3 sets, defeated Brazil, and lost to Germany today in 3 sets as well. Footage of the match against Germany can actually be found online here.

We were also fortunate to be interviewed by CBC earlier last week about coming to this testing event, and ironically, I read the article after we finished the tournament. 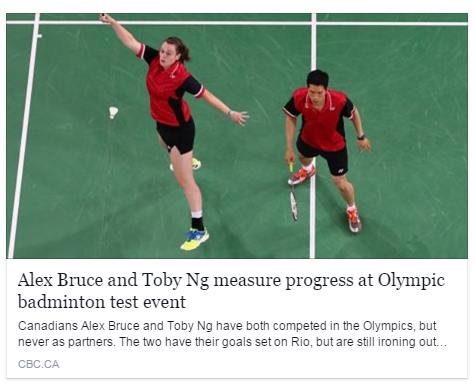 "[The event is] more a matter of seeing if we're at the next level we want to be at or if we still need to fine tune."

Again, I think we are almost there… but not quite. I think we are doing some really good things to challenge better teams, but we lack the consistency at the moment to win the full match. It’s nice to be able to take games off some of the top teams at this tournament, and the next step is to start getting those wins. Of course, there are many factors, but I think one of our goals as a team is to try to stay healthy so that we can perform consistently enough to find that win, especially against teams that might not be at 100% on the day of the match. If we aren’t 100% either (or as close as possible), I think that might cost us a chance of that big win. This factor is especially important this year, as some teams may be tired from traveling a lot, jetlagged, sick from local food/water, or not recovered from a previous tournament. Recovery is important, but I suppose it’s also time consuming. But hey, it’s a choice.

As for the rest of this week in Brazil, it’s time to make the most of our time to learn from our mistakes and get ready for our next 3 tournaments in Orlando, Los Angeles, and Mexico City!

You may also like Rio For Real - Is the Road to Rio Half-Begun or Half-Over?
Share this article
Back to Home