BACK STORY: I'm heading to Europe for a few tournaments and I have already gotten sick. It could have been from anywhere, but I think it is likely from people who are probably sick to play badminton who went anyway, no different from those students who probably shouldn't be going to school but go anyway. Regardless, perhaps I let my immunity down for a second and all hell breaks loose at a microscopic level, because some virus decides to multiply and wreak havoc. It started 2 days before I left. What began as a sore throat spread to nasal congestion, and inevitably an upper respiratory infection, including a nagging dry cough. I was hoping to take some medication to help with the cough, but it went deeper down and now I think I have bronchitis. Great. I wish I could see a doctor, but I'm in Austria now. Symptoms aren't too severe although it's getting quite difficult to sleep, so it's time to fight back the best way I can... 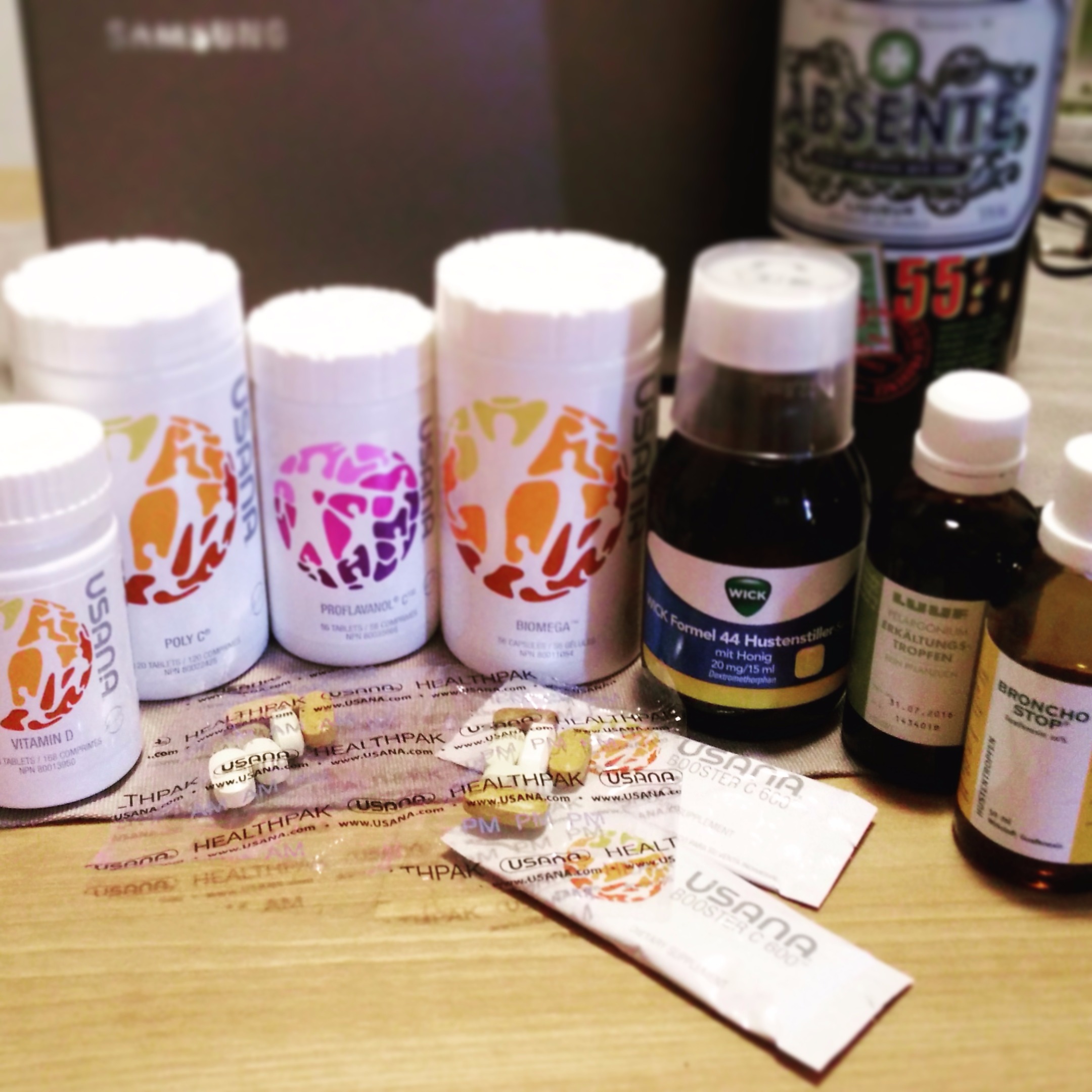 So I've decided to combine my supplements with whatever additional medication I could get over the counter in Austria. I'd like to think of it as combining Marvel and DC superheroes to fight a common enemy... whoever that is. Maybe they'll do something like that in the future.

First off, I trust USANA supplements for their quality and potency (bioavailability).

- Vitamin D is necessarily for a wide range of things including the well known pairing to help Calcium absorption. Trying to stay indoors for my cold eliminates sunlight, and I don't drink 20 cups of milk per day is why I supplement Vitamin D

- Poly C is a unique formulation of Vitamin C by USANA, but the difference is that they have switched out the acid part in "ascorbic acid" and attached minerals instead, so you have Calcium, Potassium, Magnesium, and Zinc ascorbates. I prefer this over typical ascorbic acid (i.e. Vitamin C).

- BiOmega is high quality fish oil, with a bottle that prevents oxidation from light and is guaranteed to be free of contaminants. Fish oil is known for its anti-inflammatory properties among other benefits.

- Booster C is an American exclusive of Poly C, which includes Echinacea which has some evidence to help with colds.

- The HealthPak is a conviently packages multivitamin/multimineral, split over 8 tablets per day to maximize bioavailability. I can't imagine jamming it into one tablet. Can you imagine trying to eat all your meals in one sitting each day? How is that any different? As a bonus, I also get a Calcium/Magnesium tablet and an AO (antioxidant) Booster, which features red wine extract (resveratrol).

- The first heavy hitter (i.e. the drugs) contains Guaifenesin. Perhaps better known as Mucinex or other brands, this is an expectorant which helps me cough up more disgusting stuff. In Austria, it's in drop form, where I take about 50 drops, 4 times per day. It is in an alcohol solution (which is VERY strong) and there are warnings attached, mainly due to the alcohol.

- The second heavy hitter contains Dextromethorphan, a cough suppressant. You can find this ingredient in your Tylenol Cold and Flu, and other NSAID cold medication. This is primarily for me to use before I sleep because it has been a bit difficult to sleep the past 2 nights due to the coughing.

- The third heavy hitter is actually not really a heavy hitter as it is more of a plant based pharmaceutical. I was VERY interested to find a 'supplement' that was very effective for my condition (acute bronchitis) and there has been promising research on it. I posted the name on Facebook previously, but it didn't have very much reception, but mainly because it is already a pain to read, let alone type or try to pronounce. Pelargonium Sidoides, or let's call it an African geranium, appears to have studies that show 40-60% of people having their bronchitis resolve within a week of supplementation. So with maybe another portion being placebo, I really like my odds then.

I guess as the saying goes, "A healthy man has [many] wishes, a sick man only one."

This is a last minute blog because I felt it would be WAY too long for Instagram, so think of it as an extended Instagram post. Any information in this post should not be taken as medical advice because doctors give medical advice and I'm not a doctor. However, these are my methods and have been successful with me. Whether you think your case is the same as mine is your choice. If in doubt, please seek a medical professional.

I also can sell USANA products, but to be fair, I also pay for them at a preferred price. To find out how you can get them at the same price, please contact me.