I have been a long time user of Heart Rate Variability (HRV) and I started back in 2014 under the recommendations of my strength coach, although I was also researching it to help my badminton. Her recommendation tipped my decision and I started with BioForce HRV, developed by Joel Jamieson. Later on, he improved his system and created Morpheus, which I'm now using. I'm pretty happy with it and I still use it when I remember to, as it has been ingrained as a daily morning habit... most of the time.

Recently, the M5 band was launched, which I wear on my forearm to track activity levels. Basically, a reading is taken each morning to get a recovery score, and additional exercise may increase or decrease your score. Before, I would need to connect it to my phone to see my progress, and that was not feasible for something like a badminton match during a tournament, but the M5 works perfectly!

And that's what I did. Although I'm retired from international competition, I still enjoy competing and I train twice a week to stay in shape. I'm very grateful to be able to enjoy the sport and I still find competition very interesting. Training is like studying in school, whereas competition is like taking an exam. Despite not studying enough, sometimes you wonder if you still know enough. The goal is to do as best as you can with what you have, and I truly believe that's a very powerful life lesson.

I competed at the 2019 BC Elite over a weekend in November in both doubles (MD) and mixed (XD). MD started in the Round of 16, whereas XD started in the Round of 32, which wasn't bad because I was playing with a new partner, so the extra round gave us more practice together. Unfortunately, I was not able to get the M5 band to record every match, but the overall effect was still measured.

The sequence of matches (and # games) was approximately:

And here is the recovery data (look for Red rectangles): 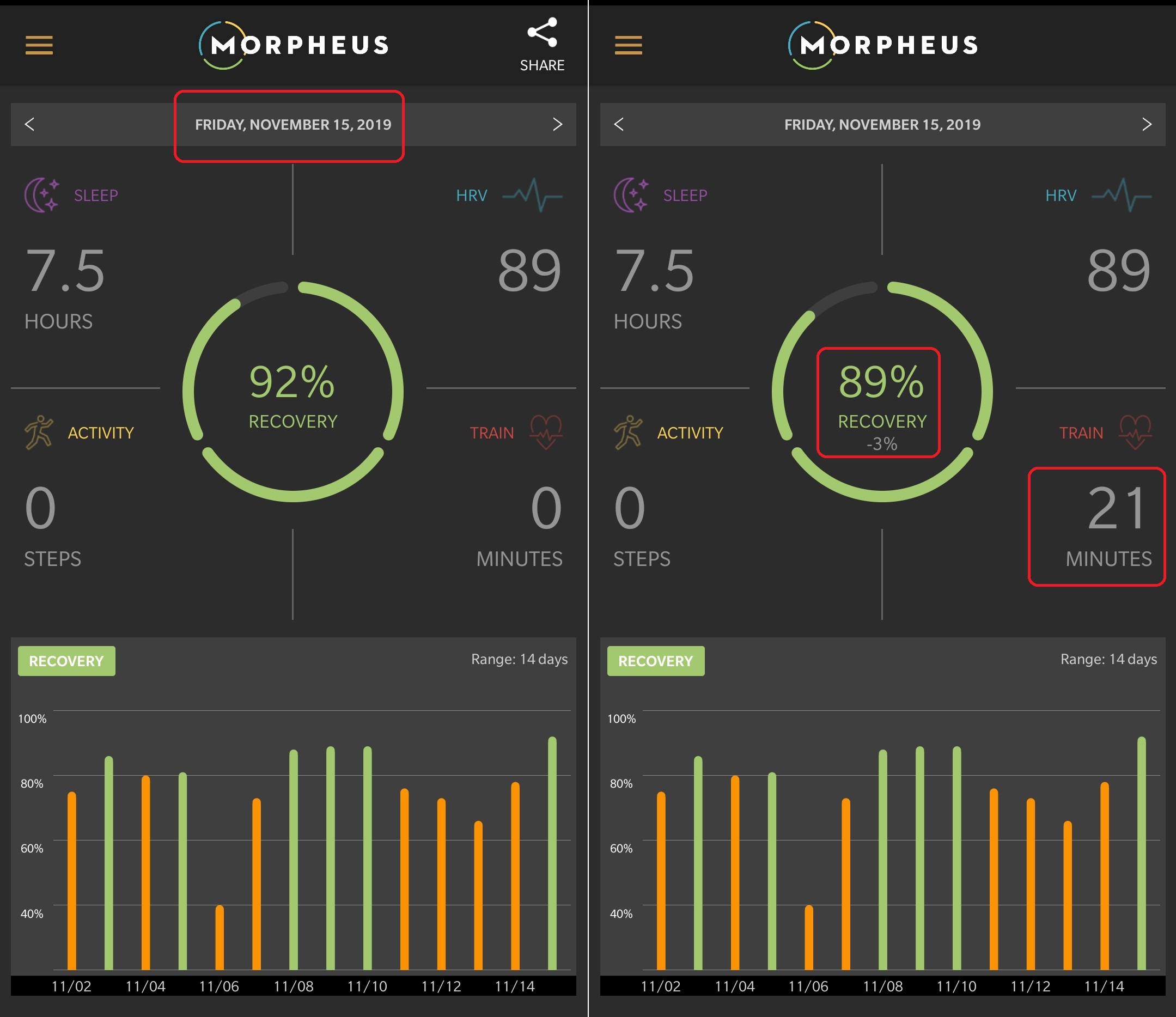 My baseline recovery score for the tournament was 92%, which is pretty good as you can see the following days in the week were not exceptional. I also had a good amount of sleep so I was "combat ready" (yes, I'm a RWBY fan)!

After my XD match, my score only dropped 3% for the day. So far so good.

Despite getting a little less sleep, my recovery score was even better on Saturday. Although I missed my first match (either I forgot or the band couldn't find my heart rate during the match), I was able to measure it for the XD Round of 16 match. It dropped only 1% after so I was feeling pretty good.

I measured my MD quarterfinal, which was a longer 3-game match which took my recovery down another 11% (12% overall). I missed my XD quarterfinal as it was not recording properly so I took it off during the match unfortunately, as it would have been great to see if I was mentally fatigued (feeling tired, but lower heart rate) or physically fatigued (feeling tired and close to max heart rate) at different parts of the match. However, I was able to record my last match of the day, which dropped my score another 8% (20% overall). I think the training time was a combined total of what I measured over the day. 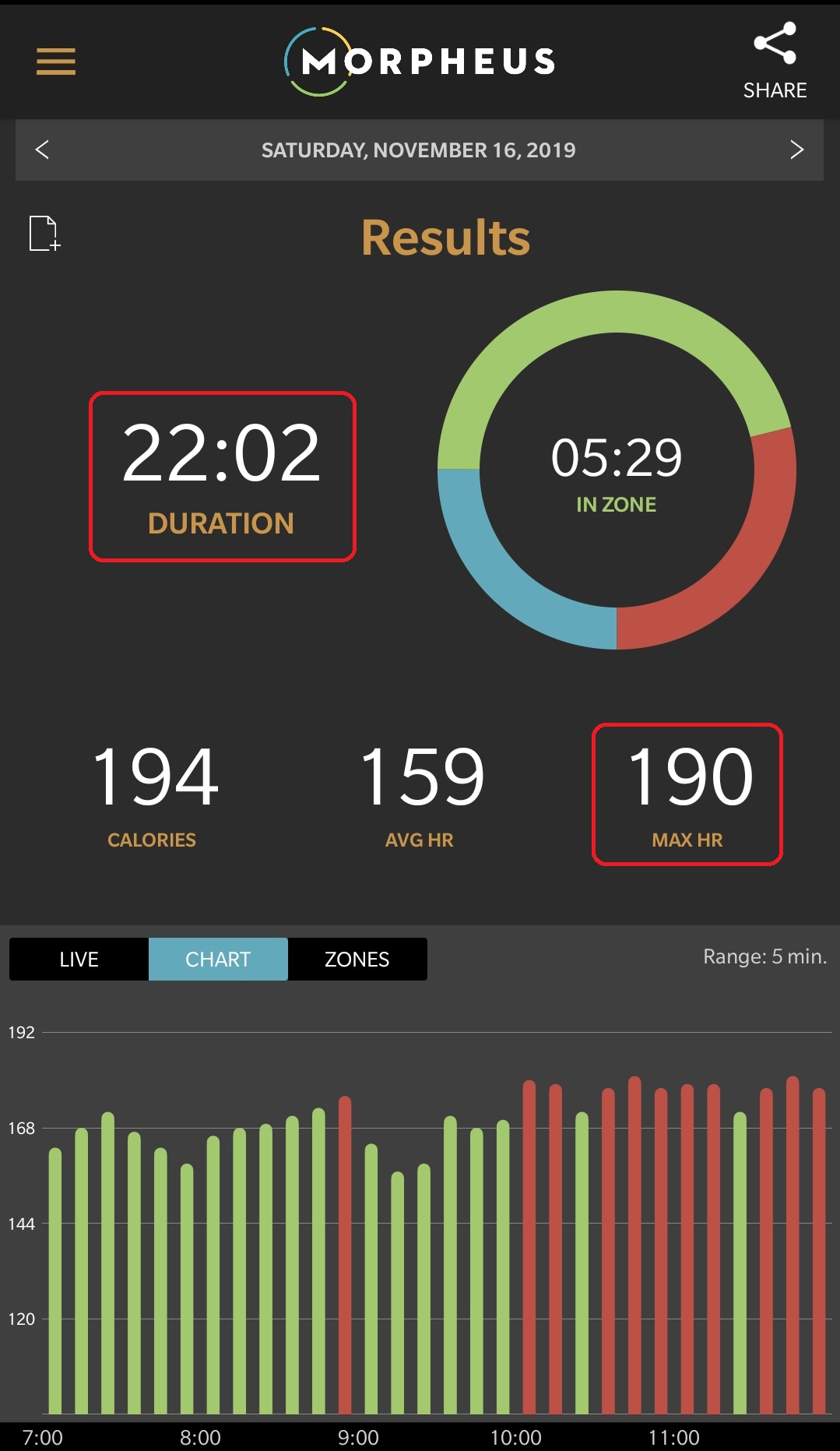 Here is a sample reading of one of my matches. The duration is the time my heart rate was in one of the three zones (blue = recover, green = conditioning, red = overload), and the time in zone (05:29) should be the time in my recovery zone (if I recall correctly). If my heart rate was really 190 beats per minute, then that would be actually higher than what is predicted in the "220 BPM - Age" formula, which actually isn't a great estimate of heart rate. 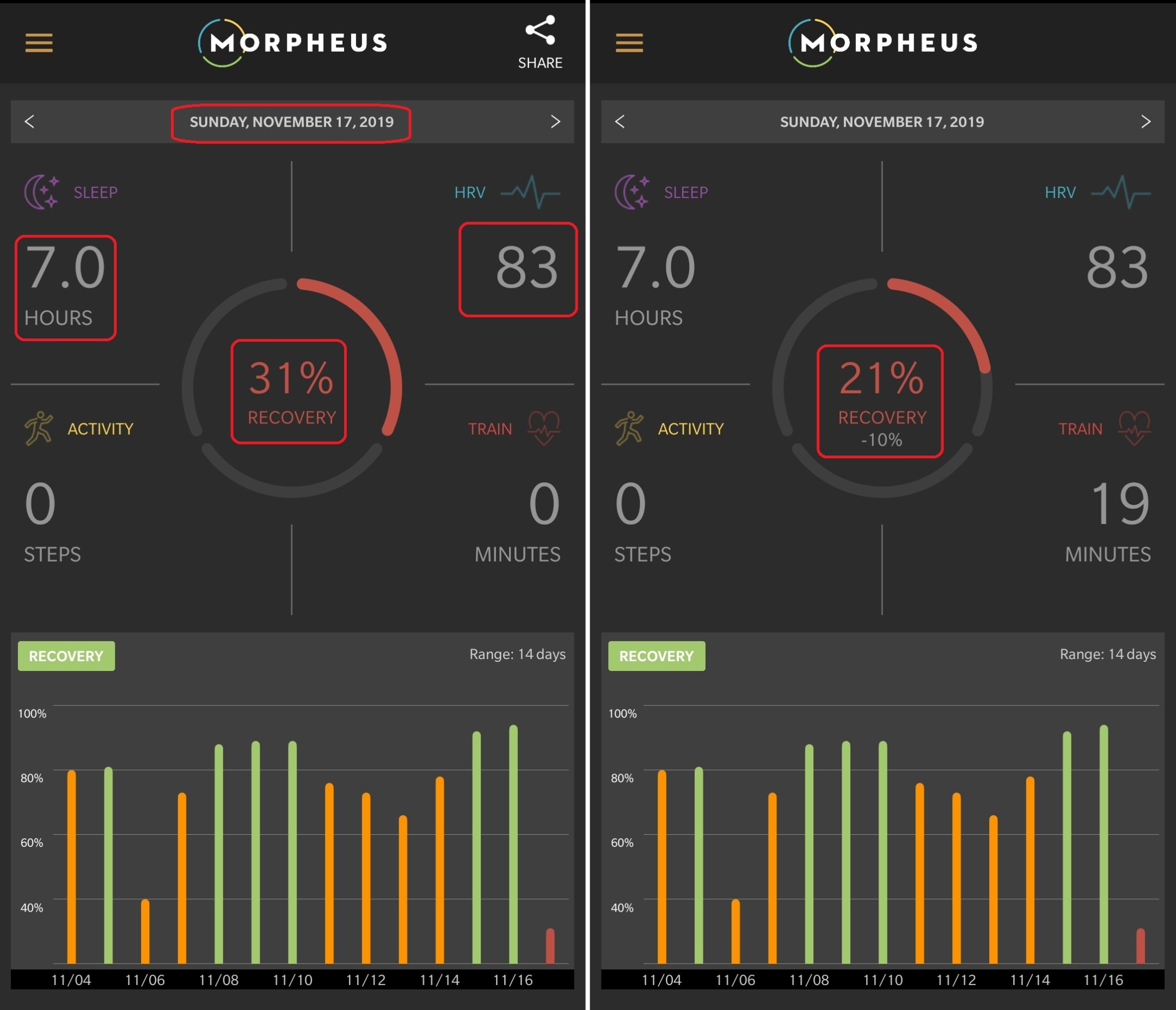 My recovery tanked on Sunday, and I remember waking up extremely sore. With age, it seems that you can keep up with younger players in the moment, but the recovery is what makes the difference with each additional day of competition slowing you down further. After my match, I dropped another 10%. 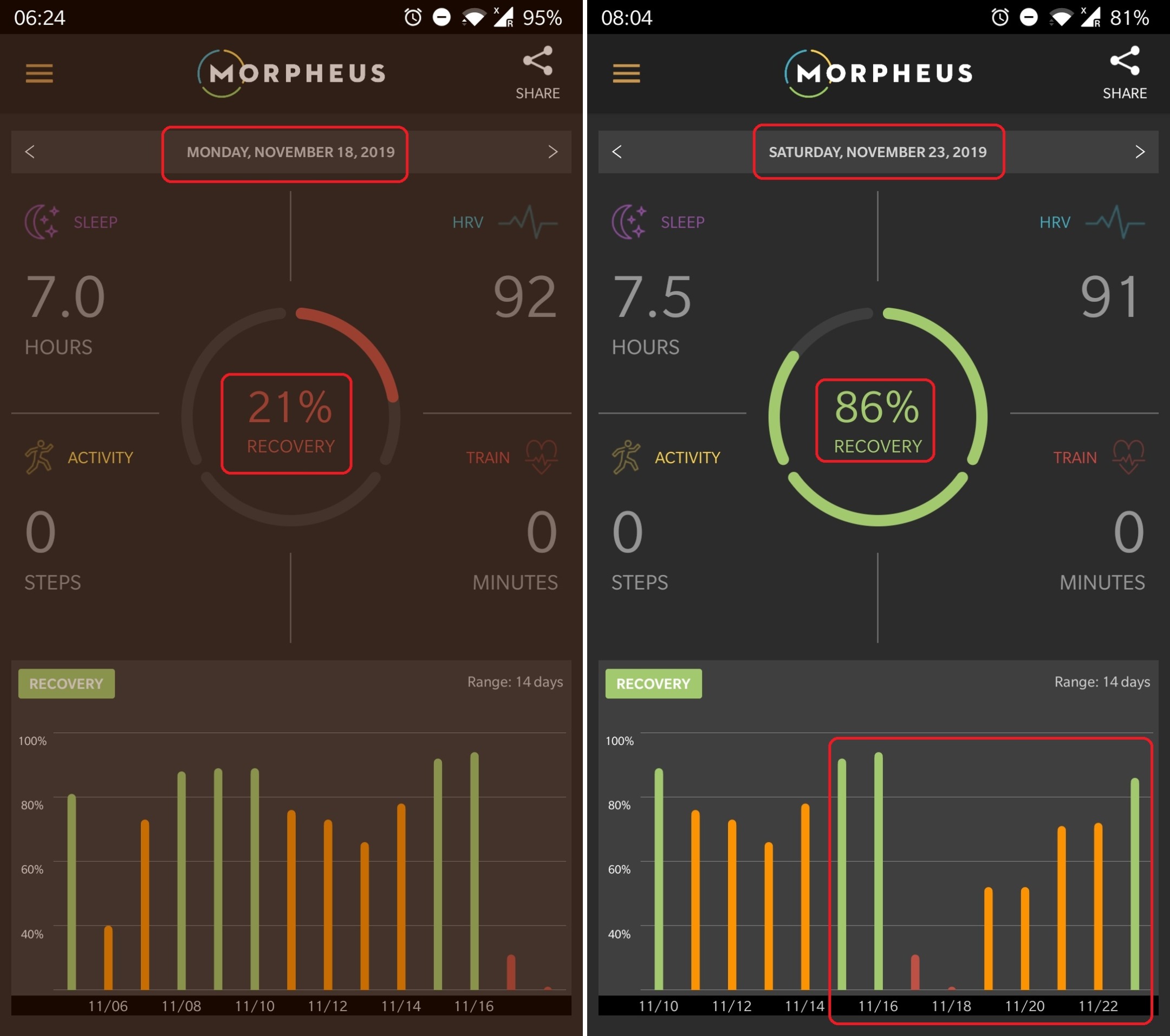 The next morning, my recovery score was still extremely low. It would take about a week to fully recover, although it might have been improved with more lighter recovery work (which I clearly did not do). However, it's interesting to look at the toll of a tournament and what it takes to bounce back for an older athlete. Although this is just my example and doesn't necessarily apply to everyone, I think there are still some interesting insights to take. I'll definitely try this again sometime and see if I get a similar result. My apologies for the red tint on the reading on the left as my blue light filter on my phone was still on.

On review, I do think that my fitness has taken quite a dive, although I still feel fairly conditioned to compete, depending on the event. For the difference between fitness and conditioning, I believe my fitness markers aren't great, but my conditioning is still pretty consistent as I can pace myself fairly well throughout matches. Shuttles were at an appropriate speed, although I would likely have a greater advantage if the shuttles were faster (and a disadvantage if they were slower). My "touch" wasn't great in the XD quarterfinal especially with additional fatigue. Looking back at the tournament, there would be some changes I would make for the next one:

- Too many tasks/events: I was coaching and playing 2 events, which felt like 3 events. I think for a serious competition, I would prefer to play 1 event because coaching is sporadic and it's hard to control the schedule of when coaching is needed. I like to coach as well as I compete, and that needs "warm ups" and "cooldowns" as well, include pre-briefing and debriefing of matches.

- Improve fitness and key elements of event: I was a bit scattered between events, as I was mostly playing front court in MD and back court in XD, and neither were excellent. I need more stamina in the back court for XD, and tactical elements for MD to make better choices at the net. For example, if I play against someone who mostly plays singles, I don't need to hit to the sides as much because that is typically their strength. I should keep it at their body and only change directions slightly. This came after I tried a deceptive shot at the net and was burned by a singles player who hit a cross-court net shot that I was not expecting. Although at higher levels, you expect people to adapt and it would have been a very viable shot selection if it was against his partner instead, but in hindsight, the decision was a poor choice on my part.

- Eating more carbs: I stupidly ate a salad at lunch for "health" and despite what they say in the popular semi-documentary "The Game Changers", a Cobb salad did not give me enough energy to last the day. In the documentary, they made a claim that people eat protein for energy. In my life as an athlete, I have never heard anyone say that before. Despite the mixed science of "carb loading", eating healthy is one thing, but having food that can convert into usable energy is much more important for a competition. Healthy food usually should include an adequate amount of fiber, but it doesn't feel great to have a bunch of food stuck inside your body when you exercise. Blood is shunted to your muscles anyway during exercise, so your digestion is likely on hold. That's why I usually chose white rice over brown rice when I was competing, and then back to brown rice when I'm not. Maybe that's why fast food has so much appeal to some athletes. As I'm not a nutrition expert, I could be terribly wrong so please take this with a grain of salt (yes, I just did that).

- Recovery modalities between matches: I didn't use any of the tools I typically use for competition because I didn't really know how far I would go with the tournament, but I should have been more prepared. I have a Hypervolt (massage gun), Marc Pro Plus (EMS - muscle stim), and even rollers and massage sticks I could have used to help my muscles out, but I didn't bring anything with me.

- Warm Up: I really could have warmed up better than I did (i.e. practically just a prying goblet squat and some reaching for T-spine mobility)

- Stop switching racquets: I was cycling between a Yonex Astrox 88D, Astrox 88S, and Arc Saber 10, especially in the XD quarterfinal. No wonder I didn't quite have the "touch".

- Keeping the mindset: "You control how you play"

I'm not sure when my next tournament will be, although the 2020 Canadian National Championships are coming up and it would be great to compete there! I would also like to test out 6 weeks of strength training with kettlebells only and see how that feels on my conditioning and performance, as I've just finished a bunch of sessions learning StrongFirst principles from AMPFit. Perhaps that could be my next personal badminton experiment! If you're in Metro Vancouver, I do recommend them as I think it's important to be able to improve strength as it will help everything else even outside of sport! Plus, I love low reps and anti-glycolytic training!