It is a commonly held belief that a good player does not necessarily make a good coach. But should we further define what that really means? What is a "good" player? Provincial champion? National champion? Pan American champion? World champion? Without really distinguishing that difference creates a bit of a problem, because one might just have a simple response:

"Well, they just weren't good enough as a player."

In badminton, it seems like the best coaches in the world are all former players. It is also common belief that having former playing experience is necessary for coaching success. Even I was a strong supporter of this for the longest time.

What changed? What is it that made me change my mind? It wasn't so much that I came across new information, but rather reflecting on my current status as an athlete. It is the athlete transitioning that made me aware of this contradiction.

Simply stated, once I transition into a new field, my badminton expertise is less useful. My experiences are not quite the same. If I took the very same argument that I believed in and transferred it into my newly chosen career path, it would be discouraging because I would have much less experience and much less of a background. Consider something technical, such as data science, which requires a technical background in both computer science, math, and statistics. By taking a similar belief about player experience and coaching, there would be no way to be an "expert", despite trying to start all over again from scratch. How do I catch up to other people if I am already 10-15 years behind?

So I have two choices:

1) stick to my old beliefs and be convinced that I will never be good at anything else; or,

2) change my old beliefs and be convinced that I can become good at something else. As a corollary, if I can do that, then other people can do it too provided they put in the necessary work.

I think I will stick with #2, for my own sake. Perhaps I could be wrong and I will never be good at something else, but then I would rather it be that way because I didn't put in the necessary time or effort to improve myself. This would be an extension back to coaching as well. For those without player experience, it is necessary to spend time learning through observation and interviewing players as often as possible. It would also help to teach sometimes through the experiences and stories of others.

For example, in doubles, "block and move in" on defense is a basic strategy, but there are different layers to it based on the level of play. For lower levels, it is a simple way for an opportunity to convert from defense to offense. However, at higher levels of play, there are additional factors to consider. Players have harder smashes, and defensive position is sometimes closer to the back of the court. This change in position automatically makes it harder to cover the net after a block because an additional distance needs to be covered. Secondly, the assumption at lower levels is that the block is often good enough and the opponent will lift. That doesn't necessarily happen at higher levels of play. There is additional complexity at higher levels of play which make it less of a viable strategy for an instant conversion. Rather, it seems like it depends on a combination of factors for a conversion to happen.

When I see people "block and move in", my strategy is to make sure the front court person stands closer to the net. This makes it more difficult for the person trying to block and move in, because it's dangerous to move in if the block is not good enough. Then they are either left to force a block, increasing their rate of error, or execute a different strategy (e.g. re-lift, drive, etc.). For less experienced coaches, this then causes problems because an additional level of complexity is required in which they may not be comfortable in coaching their players (in that moment), or their players may not be necessarily trained for those adaptations.

I have personally seen it at times where I have a close match with opponents up to the first interval (e.g. 11-10), and then the coach comes in to coach, and after, I win the game 21-10. In mixed, there are many points that can be won right off the start, and I often see some coaches talking about the overall rally. Despite everything they told their players, the next 10 rallies would average 3-4 shots and would be over before they could even execute their strategies. But these strategies can be learned and countered. Sometimes I would be even willing to give some feedback to coaches if they only ask, but it is too easy to be stuck in our own worlds. But to be fair, I hope I don't make the same mistake in the future. It's WAY too easy to think you know something that you might not actually do. When I learn programming, I can read and understand most of the code, but if I had to force myself to cover the solution and replicate it, I would be unable to reproduce it. It is always one thing to recognize something, and another to totally understand it.

To conclude, I think upcoming coaches who don't have that player experience can still be great badminton coaches, but there needs to be a hunger to learn. There needs to be a humility to know that there is always more to learn. This can extend to everyone hoping to excel at something. Even for myself, there is still a lot for me to learn in badminton, even in my own events. For me, coaching singles would be another beast to overcome.

But I think it's doable, much like I'm trying to learn data analytics, business, and all the interesting things that make the world go round. The problem for me is that I always feel that I'm behind, and I often wonder if I will ever get anywhere. Currently, I would love for the opportunity to get to learn about machine learning and artificial intelligence, but that requires understanding statistics and linear algebra, and prerequisites include calculus and programming as well. However, the process is no different from badminton: learn the fundamentals first, because having strong fundamentals helps with complexity at later stages. Practice and training are necessary, and competitions/projects are also necessary to move you along, even if you lose/fail. Failure is the best way to learn and I think the most important thing of all is this one thing:

Be humble. It's one to be excited and talk about something, but never lose an opportunity to learn from those who are better. Learning to kill your ego for the sake of learning may be difficult at first, but if you can do that, it will be one of the best things you will ever do for yourself. Ego is the enemy (after one of my favourite books by Ryan Holiday).

Good luck to everyone and happy learning. May we all work together and learn from each other, so we can get to even greater levels of success and achievement.

Because, one way or another... we will never be good enough. 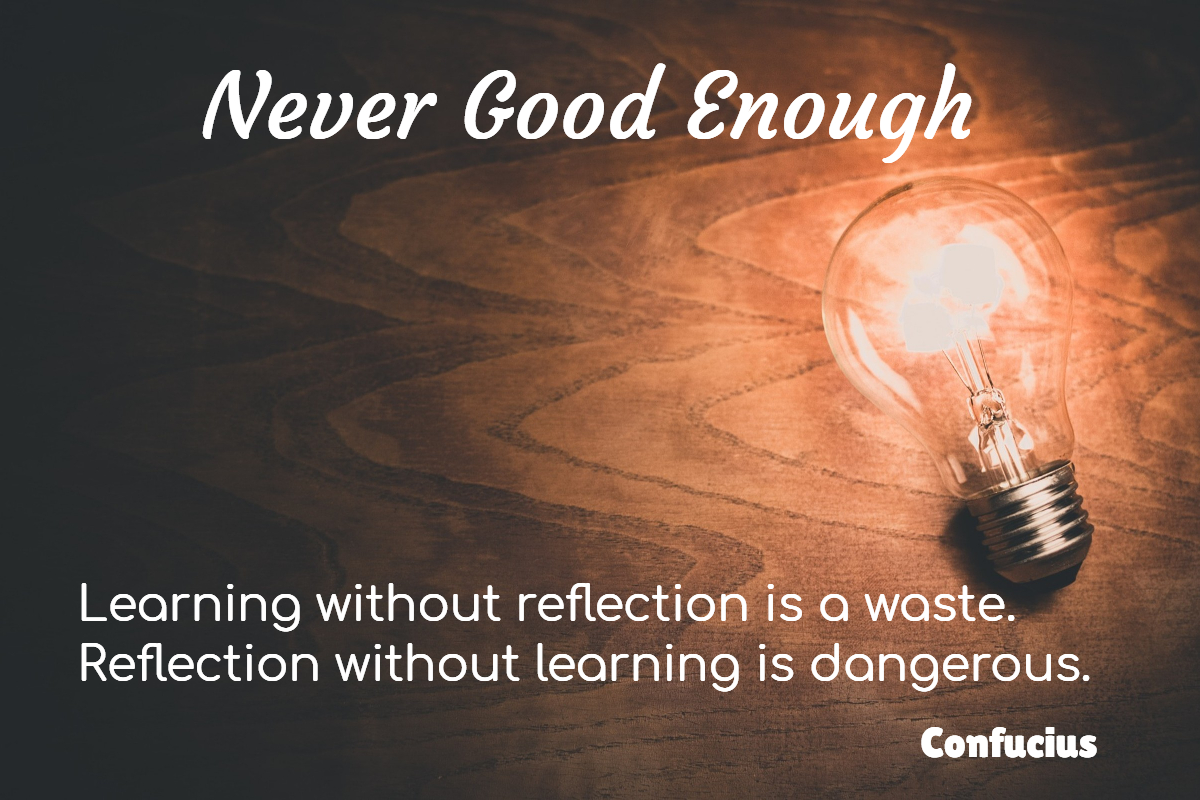