Rio For Real - Is the Road to Rio Half-Begun or Half-Over?

We’re almost halfway through the Olympic qualifying period since we are at the end of October and it’s already been 6 months! That leaves 6 more months of qualifying, with the next 2 months being quite critical, as there is a slight lull in January and early February (for Nationals), before going into a crazy tournament mode again. What’s in store for then? I cannot say… because I like to plan with options. Some people like to write out an entire calendar in advance, but I’d rather have as many options as possible and choose to go based on my current results. It takes more work, but it caters to you. You can plan a University degree the same way, or you can take it year by year and see how your schedule or interests changes. Maybe you decide to switch faculties; maybe pursue a minor; maybe do co-op; or even take some time off? So why schedule too many tournaments in advance?

For those of you who don’t understand the Olympic qualification system, I will give you a very brief explanation. Tournaments have different levels based on prize money, and award different points respectively. Results are based on your top 10 results, so playing more tournaments equals more chances to earn better points (but costs you more money). For the Doubles events, there are 16 teams that qualify for the Olympics. As there are so few teams, continental spots are allotted to have all 5 continents a chance to represent (Asia, Europe, Pan America, Oceania, and Africa), with a minimum World ranking of 50. You can only have two teams of the same country if they are both in the Top 8, and after that, only 1 per country is allowed.  So generally, the top 13 spots are filled with European and Asian teams, leaving the 14th, 15th, and 16th spots for the top Pan Am, African, and Oceanian team.

As for the Singles events, there are 36+ spots, with a rule that you can have two from the same country in the top 16. From then, it goes one per country. The continental rules still exist; however, generally there is enough room for Pan American players to make the original entry and not require a continental spot, especially for Women’s Singles, as Michelle Li is the highest ranked Canadian player in all events.

Let’s take an in depth view on our current Canadian teams, based on the current ranking lists that are out. I will do my best to teach you how to access and read these lists so you can follow all the Canadian players in the future! 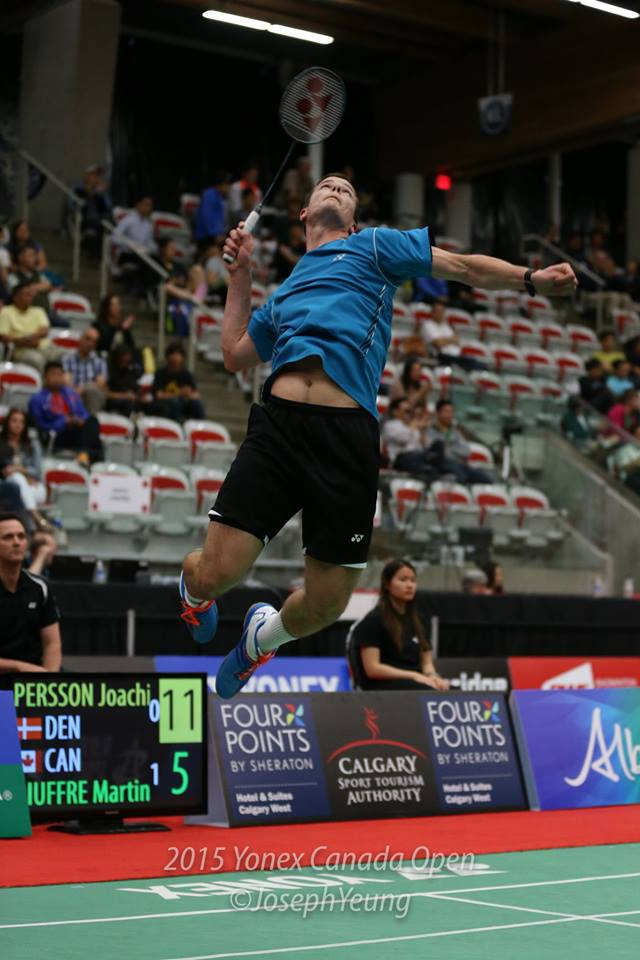 In my personal opinion, the hardest event to qualify for the Olympics in Canada is Men's Singles. Due to the nature of a lower World Ranking, it will almost always prevent a Men's Singles player from getting Sport Canada AAP due to the current Badminton Canada criteria. Therefore, Martin has no funding from Sport Canada unless he qualifies for the Olympics in which he would get 4 months of funding. Despite this setback, in the Race to Rio rankings, Martin currently stands at Reserve 3 with only 9 tournaments! This would mean that all points from his next event will be included entirely because the top 10 results are included. 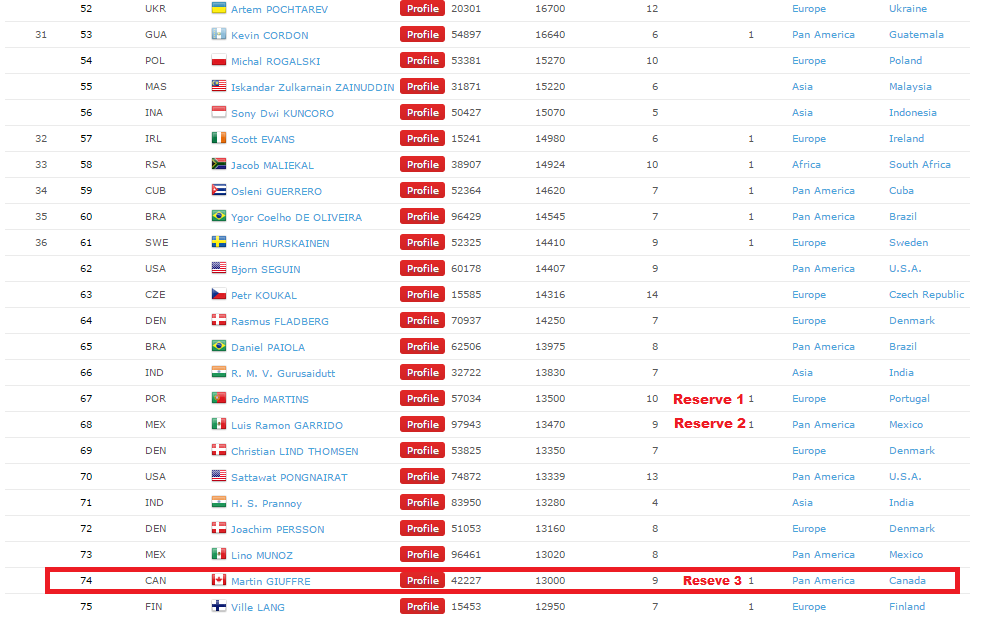 A healthy point average to aim for would be results between 2200+ which would include an International Series Final+, International Challenge Quarterfinal+, or Grand Prix Round of 16+ (where '+' means 'or higher'). An unfortunate hurdle for Martin was that he did not have a change to participate in the 2015 Pan Am Games, which gave Grand Prix points. In other continents, their continental Games (i.e. European Games, Asia Games) usually don't count for points or are held in non-Olympic qualifying years. The problem is that the Games only allows limited spots, and as Martin was ranked 2nd in terms of the internal Badminton Canada criteria for the Pan Am Games qualification, he was unable to attend the tournament. 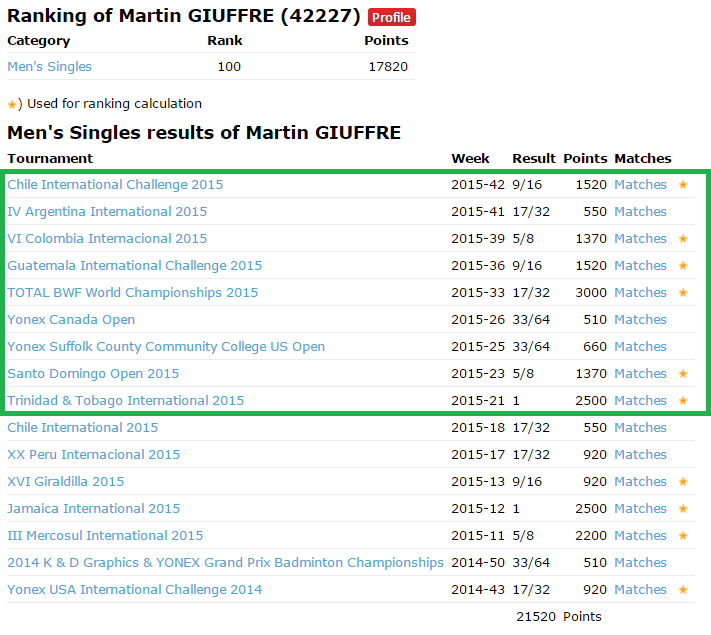 Despite the Pan Am Games hurdle, Martin has had some good results in the past, including some International Series wins which will hopefully boost his confidence. Best of luck to Martin and we'll see how things change in the next 6 months! 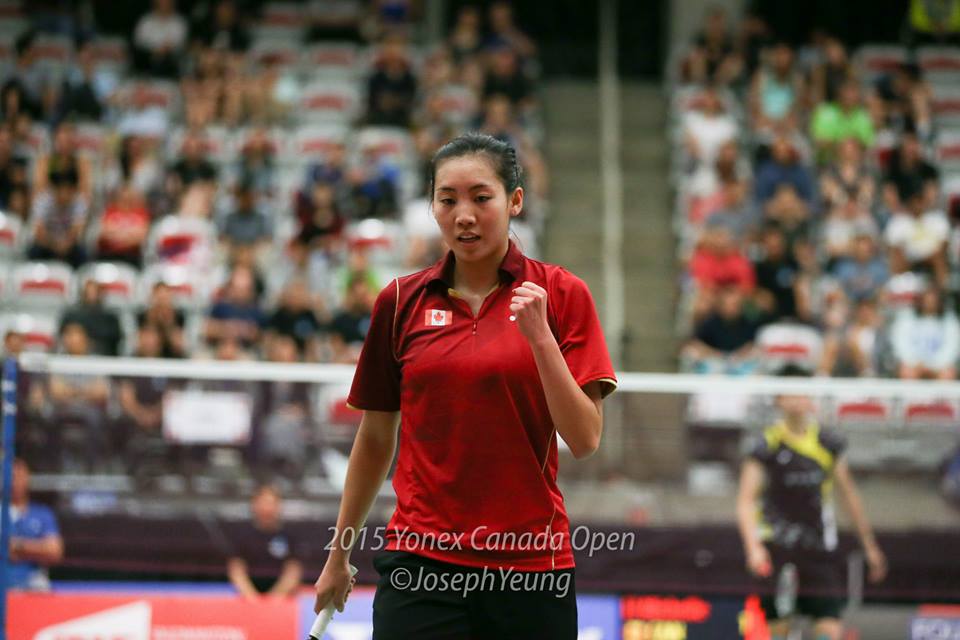 Our highest ranked Canadian badminton player shouldn't need any introduction, and she in the position where qualifying is not the issue, but how to medal at the 2016 Rio Olympics! Within the Top 10 of the Race to Rio rankings and in a very healthy position, perhaps Michelle can earn a seed going into Rio to give her a favourable draw! Her results speak for themselves as we first look at her Race to Rio rankings: 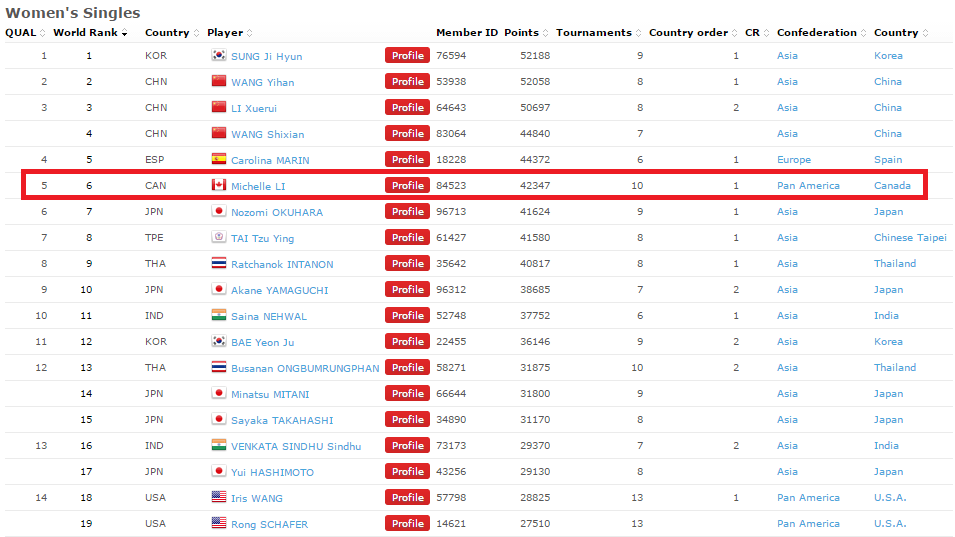 Although she has played 10 tournaments already, she has accumulated 42000 points, which would average more than winning an International Challenge. Therefore, the minimum level of competition that she should participate in would likely be a Grand Prix of higher, which she is currently doing. Despite having 10 tournaments, she has had some weaker results, giving her very good opportunities to increase her ranking even higher! 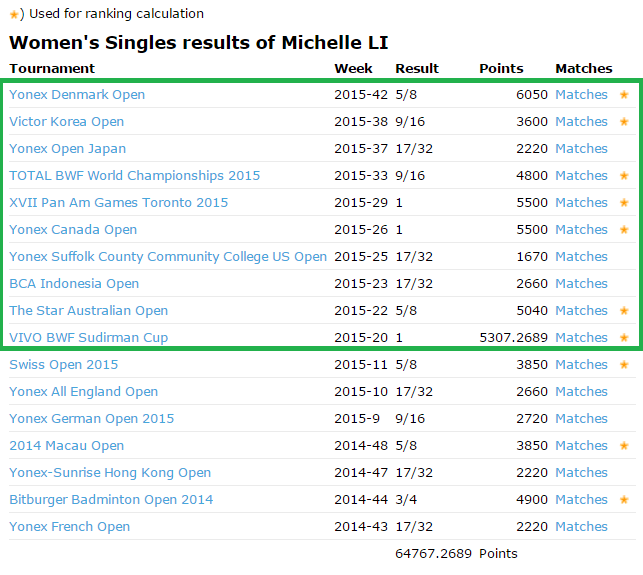 I don't think we will have to worry about Michelle qualifying for the Olympics, and instead, I hope she can find the support she needs to achieve her performance goals on the world stage! 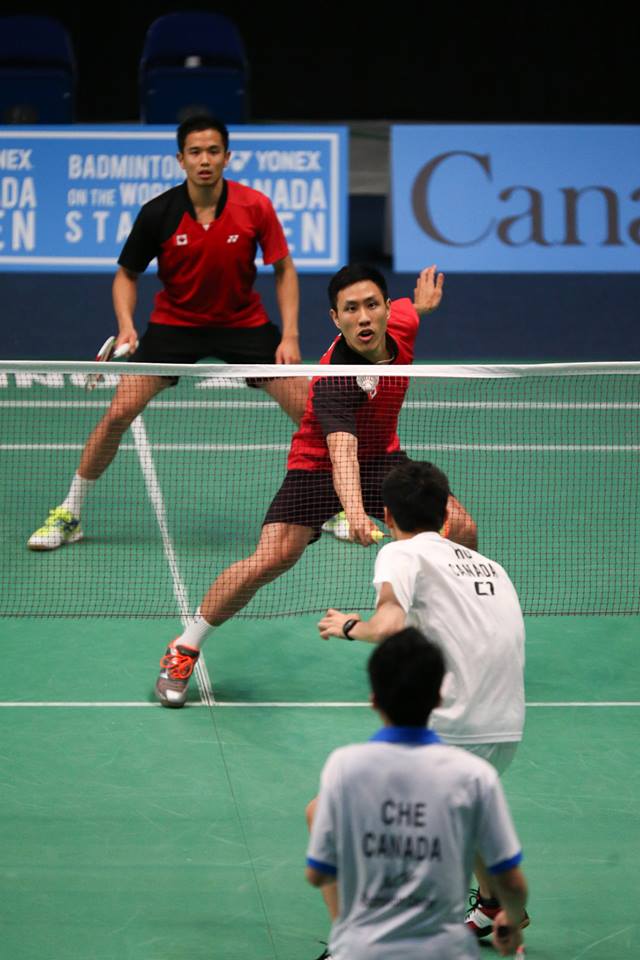 As most of us know, due to a registration error, Adrian and Derrick were disqualified from the 2015 Pan Am Games, which costed them a chance to win a gold medal, Olympic qualifying points at a Grand Prix level, and even a sponsor. Additionally, their results have been up and down since then, but after their win at the 2015 Chile International Challenge, they are hopefully back on the right track. Additionally, the tournament was significant as they won against their Pan Am rivals, Phillip CHEW & Sattawat PONGNAIRAT from the USA. The USA team currently holds the continental spot for the Pan American zone. 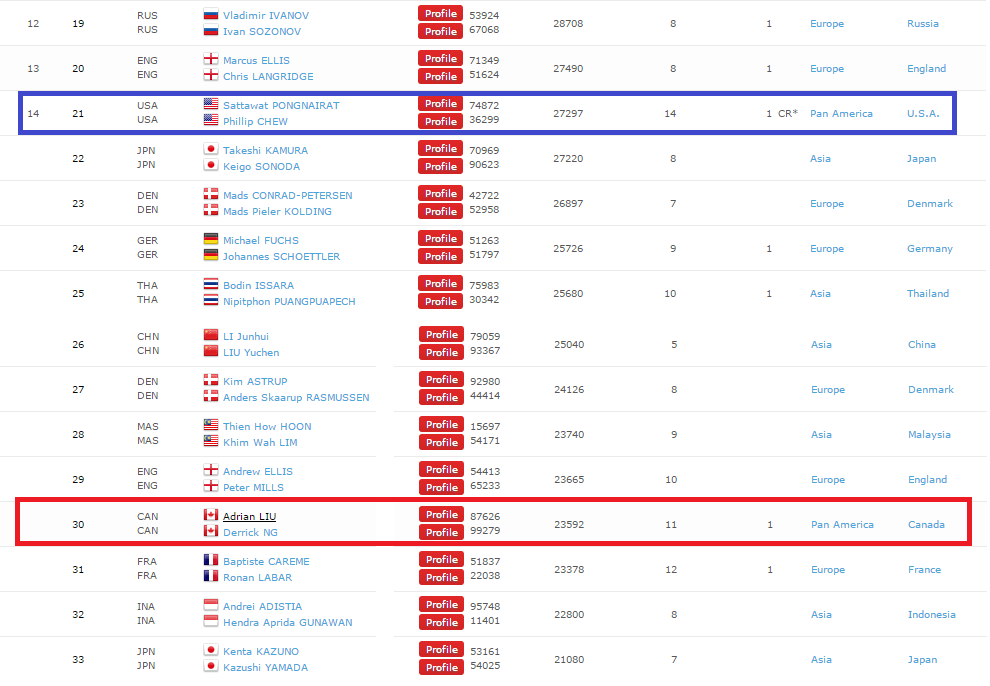 Adrian & Derrick are currently less than 4000 points from the USA, which highlights the significance of not getting to play the Pan Am Games. Had they simply lost to the USA in the final, they would be already above them in terms of ranking points. Although the Canadians have played 11 tournaments, there have been some weaker results that can be easily replaced which will bring them even closer to the Americans. 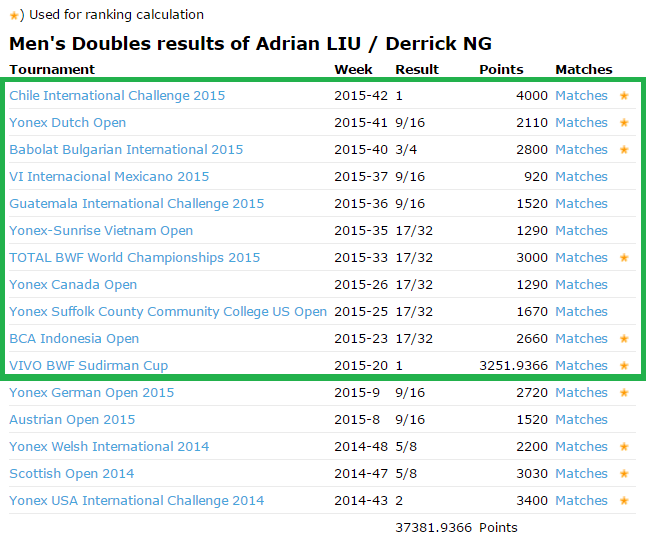 In most of the Doubles events, a healthy average would be looking for results above 3000 points as a start. With that said, this gives Adrian and Derrick some good opportunities to replace almost half of their tournament results with more points. Additionally, they have an ongoing GoFundMe campaign to look for more support to play more tournaments. Best of luck to our MD team and we know they can catch up despite their bad luck this summer. Perhaps luck will swing their way in the next half of Olympic qualifying! 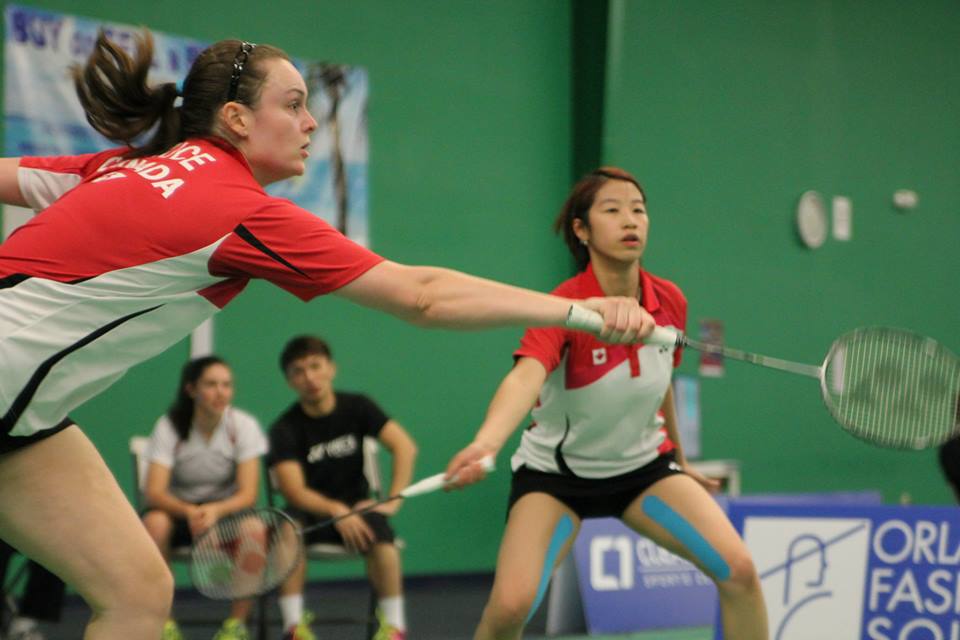 To begin, I feel a bit uneasy speaking about the Women's Doubles. Perhaps it could be because my funding went to Phyllis, which was not her fault and I don't blame her, but it just seems like an example where the team that has the most opportunity to succeed happens to be the team with the lowest chance of qualifying for the 2016 Olympics. Despite both players having funding and a chance to play in the Pan Am Games, which are 2 significant factors for Olympic qualification for Canadian players, they stand about 10 000 points behind the USA team. In other words, even if they won the next Super Series, they would still be behind the USA team if they are looking for a continental spot. 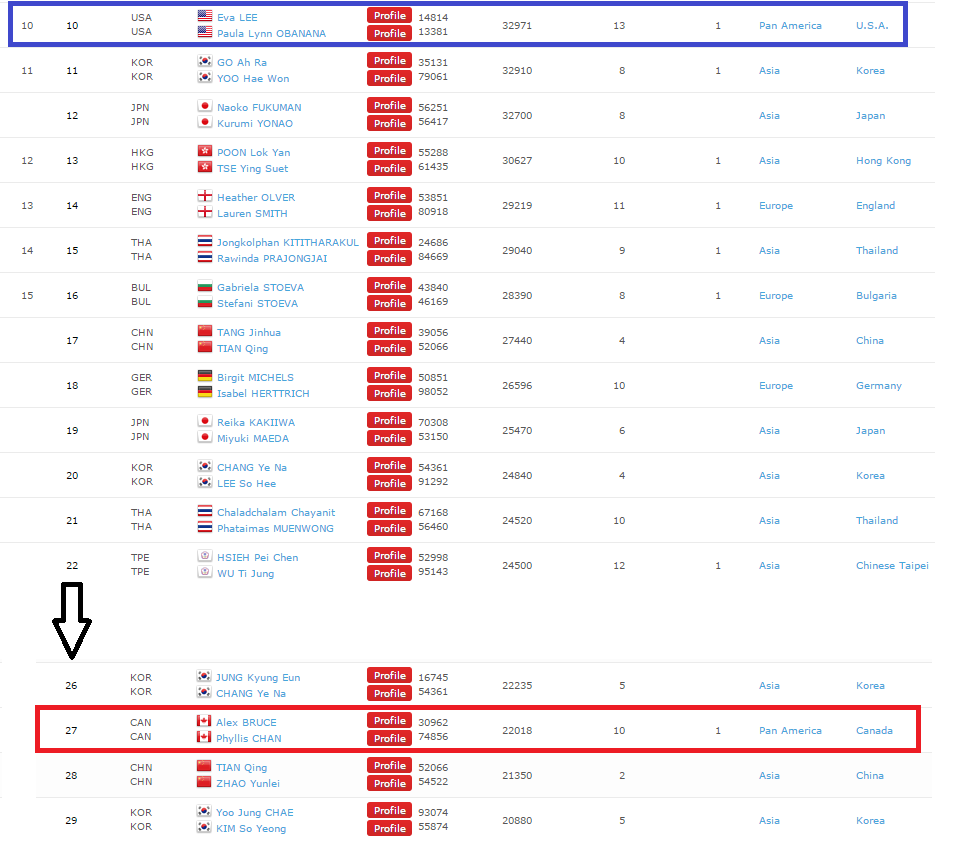 To be as objective as possible, we will continue with their current results. 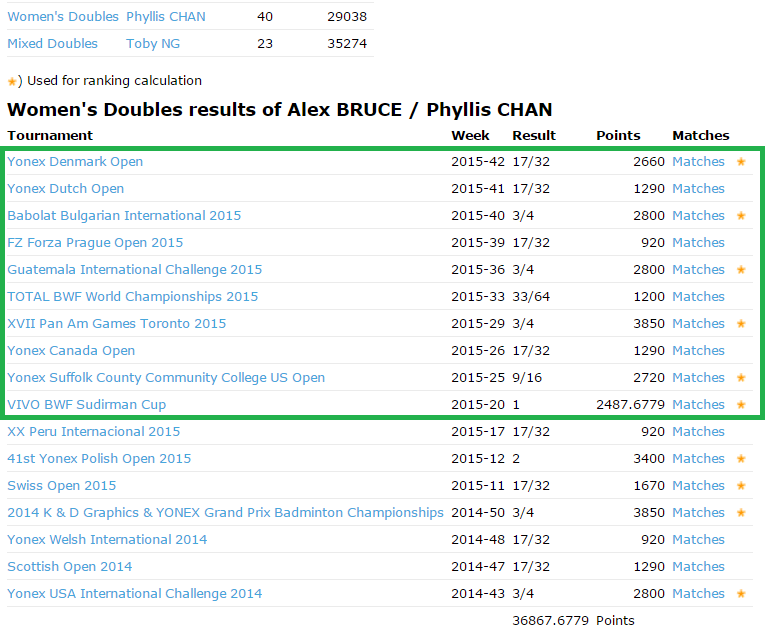 From the perspective of trying to reach a minimum of a 30 000 average, that requires results of a minimum of 3000 points per tournament. However, to be ahead of the USA team, that stands currently at 33 000, they would technically need to aim higher and require a 3400 point average, which would be an International Challenge Final+, Grand Prix Semifinal+, Grand Prix Gold Quarterfinal+, or Super Series Round of 16+. The only result that fits the above criteria has been the Pan Am Games semifinal result; however, USA won that tournament, giving more than a 1500 point difference.

However, we are only halfway through and there is always still a chance, no matter how slight. To put it into perspective, they need to play at least 9 tournaments in the next 6 months which require the minimal results specified. One way of looking at it is this:

At best, I would expect at the minimum 12 tournaments for them, but I suppose the dilemma comes because Alex has Mixed Doubles to consider as well. 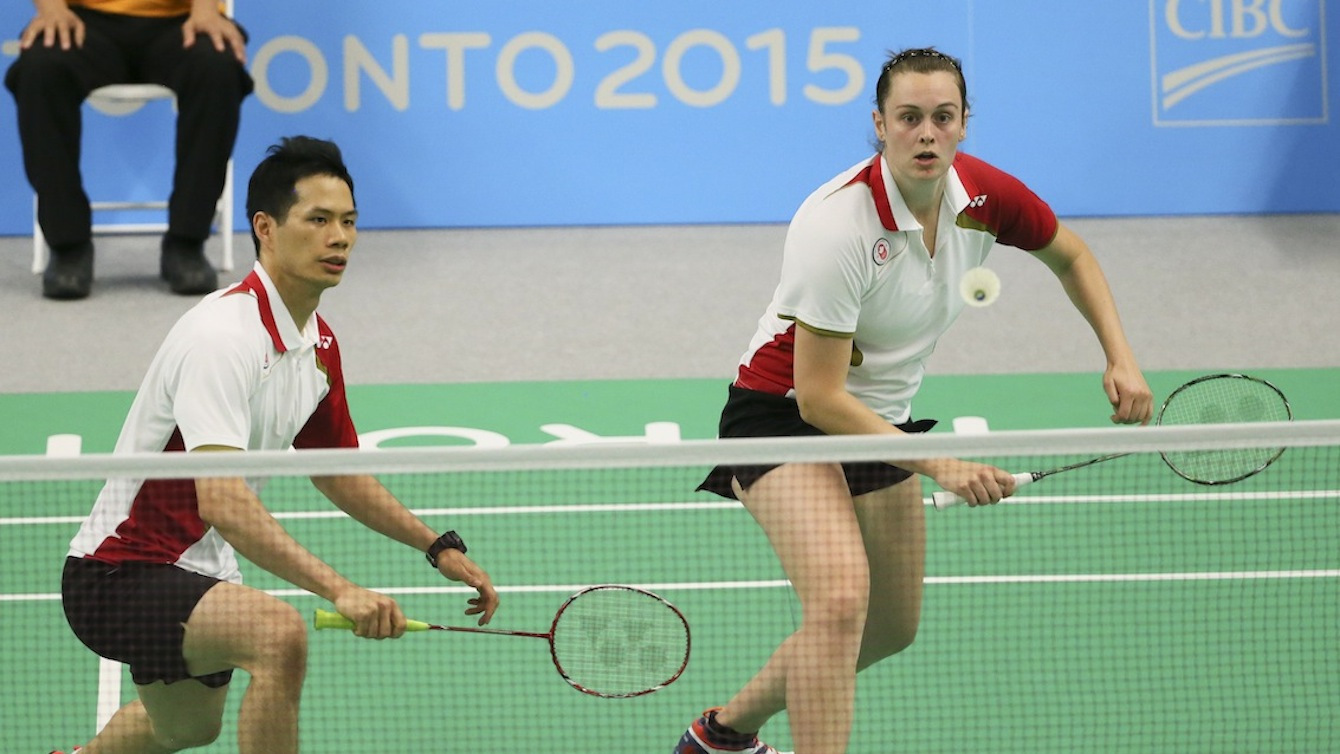 So... this is awkward as I'm writing about myself, but oh well! My hurdle consists more of the financial burden of the Olympic qualification process. My story can be found on my GoFundMe campaign and it explains how I fell through a crack in the system which lost me funding for a second year in a row. Despite my frustrations, the system still hasn't changed to protect future players, but I have a more important task to worry about at the moment: qualifying for the Rio Olympics. However, I must acknowledge the overwhelming support I have received on my campaign so far and it is really making a huge difference in my Olympic run. Thank you, from the bottom of my heart! 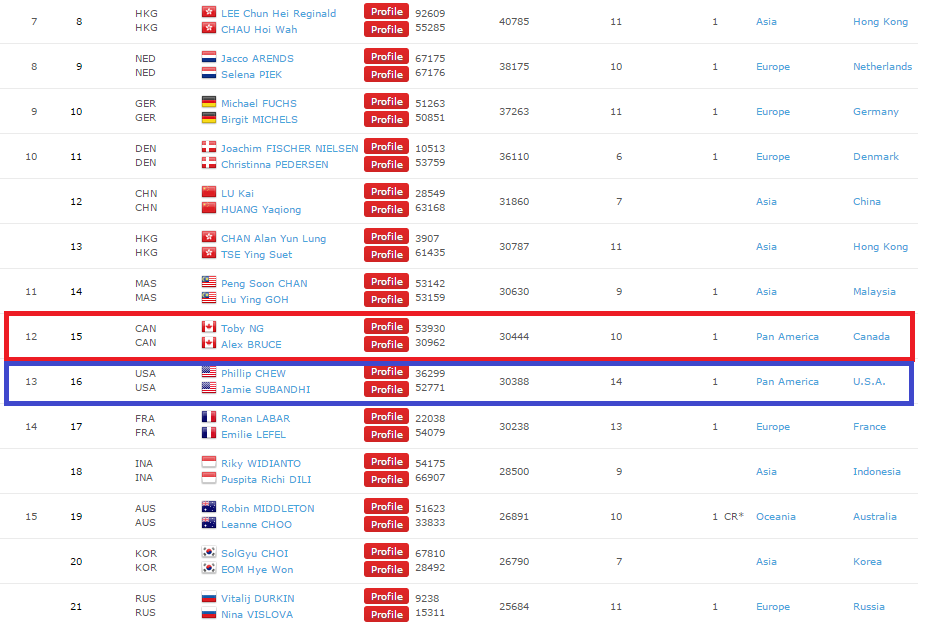 GREAT NEWS! Alex and I are now the top Pan Am team in the Race to Rio rankings! Despite all the problems we've encountered, we have stuck together and have pulled ahead ever so slightly in the Race to Rio ranking list. The difference between this list and the current World Ranking list is that Race to Rio takes into account all the tournaments that count during the Olympic qualification period ONLY. That means if we stopped playing tournaments right now until the end of April, we would have a 30444 average, which is nice, but can still be improved! 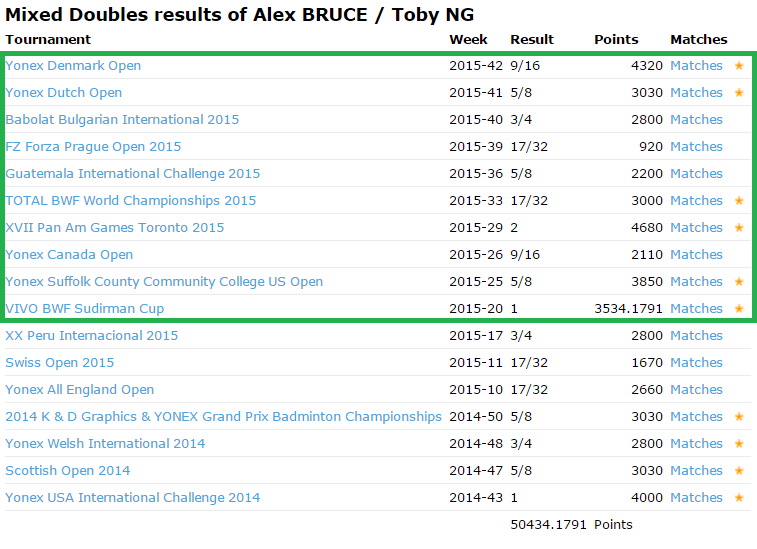 As our strategy was to get 10 results over 3000 points, we currently stand at approximately 6 out of the 10 results, which means we are slightly ahead of schedule, and we need about 4 results in the next 6 months. Due to the trend of our performance increasing, it gives us more confidence that we can perform well and challenge some of the higher level teams in the next 6 months! Additionally, with only 10 tournaments so far, we have a few results we hope to replace to increase our ranking points even more! 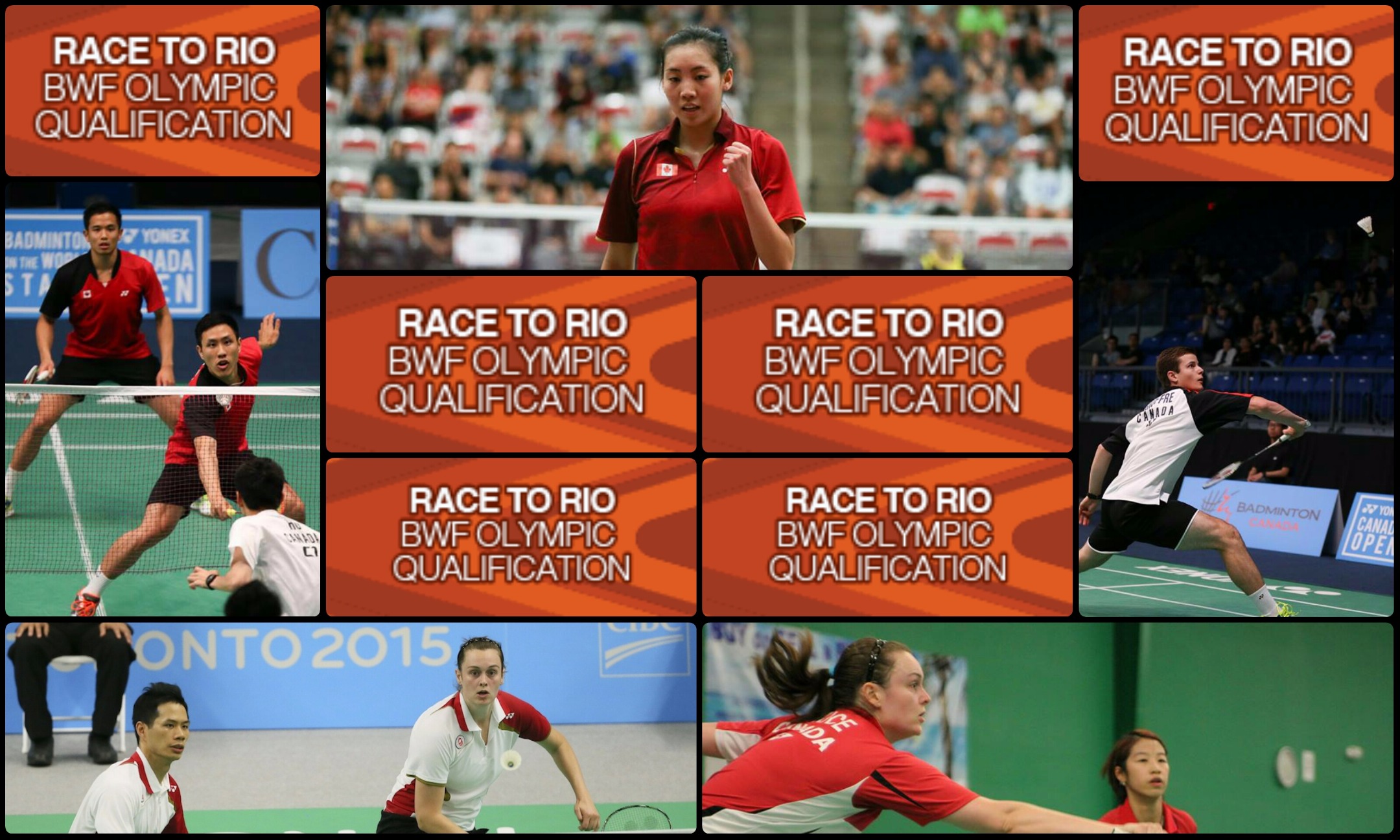