Talk to the Hand

When I was competing for Canada, I had the opportunity to train with the legendary Kim Dong Moon. I definitely credit him for elevating my level of play on the international stage, and as much as I wanted to do better, I would say it was my own limitations that stopped me from going further. I learned a lot from him and I just couldn't master everything he taught me.
Now that I'm the one coaching, I would like to pass on a few things I've learned from him that have really helped me. Of course, the original teachings have been filtered through my own interpretation, so this knowledge is reinterpreted or... "second-hand". Actually, maybe it's more like a Korean movie being remade for a North American audience.
I know, I know, you've probably already cringed from thinking of something that was poorly remade. But hey:
"I think I kinda need to just do my own thing, man. You know?" - Jimmy "B-Rabbit" Smith from 8 Mile
Training with KDM wasn't necessarily learning new things, but taking things I previously did and raising them to a world-class standard. This is literally "taking one step back to take two steps forward". Many of these upgrades simply involved short phrases which served as a constant reminder when I forgot to do them. There was a list of about 12 things I compiled, but one day on a long-haul plane ride between tournaments, I came up with an idea.
"What if I could make a checklist to remember these key points?"
Probably influenced after reading The Checklist Manifesto, I set about making a checklist. In the end, I combined a bunch of ideas together:
As such, I will aptly name this concept "Talk to the Hand". Remember, it's okay to talk to your hand. Just promise me that you'll seek professional help if your hand talks back to you (Parasyte!).
There is one cue or habit associated with each finger. These have also been purposefully constructed to maximize retention. I've kept this to myself for a while, but I figured it's best to publish these kinds of things sooner than later. Here goes:
1) Thumb: "stay low"
The thumb is in the "lowest" position of the five, so this serves as a reminder to stay low when you play. Obviously, this is only most of the time and doesn't apply in certain movements (jumping comes to mind). Generally, staying low involves bending your knees and adopting a wider posture to cover the court. How low should you go? Well, when I was competing, my reference point was "eyes below the tape (i.e. net cord)" which works for most people. However, younger players may have their "eyes below the tape" by default, so you'll have to come up with a different cue. I'm still working on that one myself at the moment.
2) 2nd/Index Finger: "second shot"
"Prepare for second shot" was what I was constantly reminded of doing. This was one of the harder lessons for me at first, because at my initial level of play, I was used to rallies ending sooner than later. At higher levels of play, things often kept coming back, so I constantly had to be ready for a second shot. The idea here is that you only need to prepare one more, because the shot you are hitting is always the first shot, and to prepare one more is to prepare the second shot. Thinking too far ahead increases reaction time, so it's best to limit how much thinking you're doing to the next (second) shot.
3) 3rd/Middle Finger: "racket up"
This one was easy to make. Have your racket up, not your middle finger. If that one made you chuckle, good! Now you'll forever remember it. However, a little more context is needed here. Ideally, the racket needs to be ready in the best place depending on the situation. Most of the time, the general positioning of the racket should be higher than lower. Some players may actually have their rackets up too high in some contexts, but this is more often the exception than the rule. As it takes more effort to hold the racket up than to have it down, I'd wager the vast majority of players will find this useful.
4) 4th/Ring Finger: "hit + step"
This one refers to hitting and (not "plus") stepping at the same time. Recovery can also be included (i.e. "hit & step & recover") but let's try to keep things simple. This is a useful habit for many shots, but not all shots. Jumping shots, early offensive shots, or very late defensive shots (e.g. diving) are clear exceptions, but this hitting & stepping together should maximize ground reaction force of the foot to help with timing and power. The association with the 4th finger is that you cannot move it well without moving the 5th finger! This is because they have shared muscles and innervation. Here's something to try: make a fist and put it on the table so that the back of your hand is facing the ceiling. Now, stick out your 4th finger (NOT the middle one) so that the other fingers are still making a fist and on the table. Now try to lift up your 4th finger. Probably can't do it, right? Now try it with the other fingers.
5) 5th/Pinky Finger: "short swing"
Your pinky finger is probably your shortest finger, hence the reminder. Unless you need a lot of power (high defensive lifts, defensive clears, and full smashes come to mind), it is probably best to have a shorter swing to help with timing and to add more deception to your shots. A shorter swing also offers a quicker recovery, and when paired with other habits, such as "hit & step" and "racket up", this will improve overall efficiency on court. 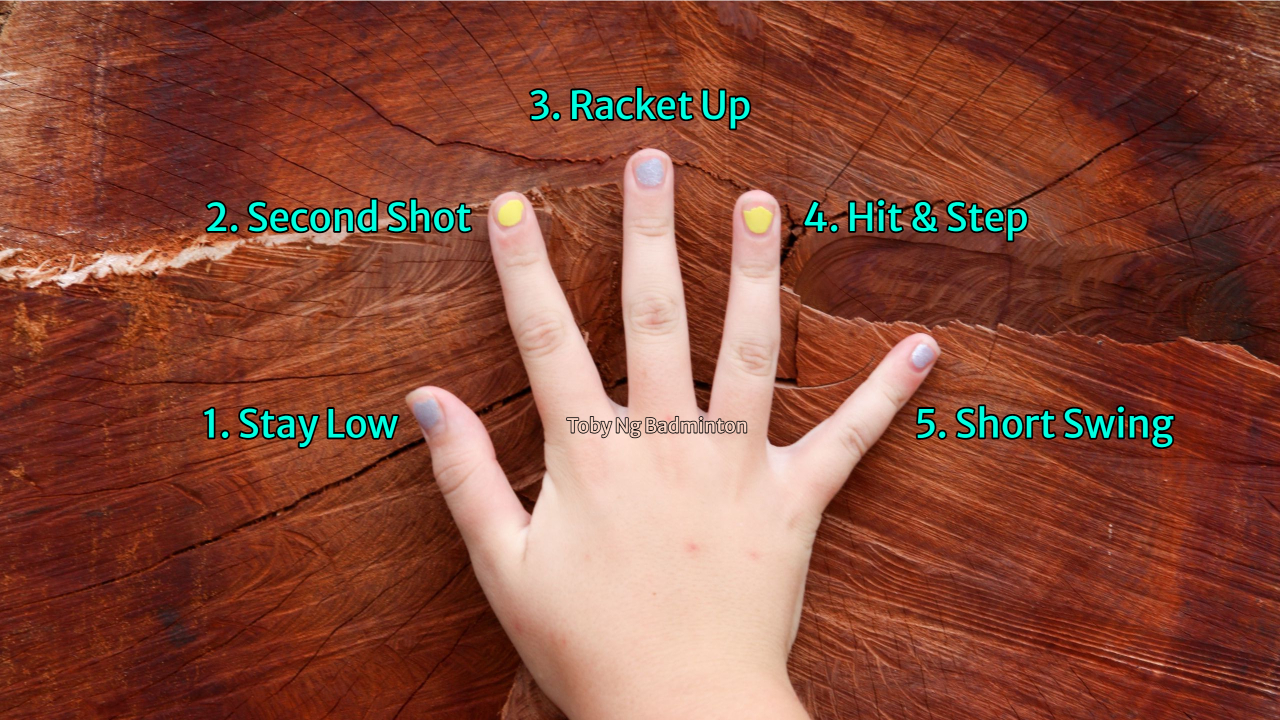 As these are all habits that should be used most of the time, it would be best to find the weakest link and work to improve on that habit until it is no longer the weakest. Although some may believe that focusing on strengths is optimal, these are fundamental habits and being overpowered in one of these five habits is not enough to compensate for a weakness in another.

Especially in training, when things aren't going well, this is a good checklist to consult, typically using your non-dominant hand. Try to find the weakest link and focus on that habit and see if your training quality improves. Once you get more comfortable with the habit, consider adding a second one. Usually, a synergistic effect occurs (i.e. 1 + 1 > 2).
Overall, these fundamental habits all work in concert with each other. For example, if you "hit & step (& recover)", you're much more likely to prepare for the "second shot". If you "stay low", you have much more reason to keep your "racket up" so you can use a "short swing". It is a common expression that "we default to our training", so building solid habits will definitely help in competition settings. As these are all technical fixes, I wouldn't necessarily recommend trying to use this in a competition setting. It's going to be less helpful because in competition, you need to focus on "what" to do, versus "how" to do it. But that's another topic for another time.
So, can you remember the checklist? I'm sure you can handle it (sorry, not sorry).
You may also like What Happens When You Read 300 Books?
Share this article
Back to Home