It has been a while from my last blog post. Fortunately, it wasn't as old as this song by TLC. I think the song is 2 years older than Rachel! :P I apologize for the lack of updates because it has been bittersweet watching the Rio Olympics from home, but I'm over it now. I have also been busy with coaching, a convention, and a tournament last month, but it's no excuse to stop blogging and updating consistently. My apologies!

Last week, I went down to play in the 2016 Rio Grand Prix at the Foz Do Iguacu. I was a bit torn as the America Masters Games was held in Vancouver the same week, and since I can play 30+ (yes, I'm old, I know), it would have been a fun tournament to play especially as it was held in the Vancouver Convention Center! However, life is never that simple and you always end up having to make choices, like how I constantly ask my girlfriend what she wants to eat, and she says "I Don't Know". Wouldn't it be cool to have a restaurant named, "I Don't Know", or "Whatever", or "You Choose?". Maybe I will find a way to open a franchise after my badminton career.
Alex Bruce, my partner for the past 3 years, has retired from competitive badminton, and I wish her all the best in her new ventures in life! She finished a degree in engineering, so I think she has a bright future ahead of her! As for me, I'm still here. I don't know how long, but I think it's actually a bit nice not to know. I am 99.99% sure that Tokyo 2020 is as far as it will get, but I cannot say at the moment. All I know is that I have at least 1 year of badminton left, and at most 4.
Fortunately, I've been lucky to pick up a new partnership, and I will be continuing to play with Rachel Honderich, from Lee's Badminton in the Toronto/Markham area! However, as she is working under Michelle Li's coach, Jennifer Lee, her focus is still Women's Singles and is playing Mixed as a second event. Since I am also playing Men's Doubles with Adrian Liu for the year, I can focus more on Doubles and treat Mixed as a secondary event as well, although I can't tell the difference between the two most of the time :P
As my story continues, I had to choose between America Masters Games or Brazil Grand Prix. One would cost entry fee and transit/gas money, while the other would cost about $2000. What would you have chosen if you were me? It's not that easy to choose. If I weighed the Pros and Cons, it would be a pretty tough decision to make. However, if you consider the long term goals first, then the decision becomes pretty simple (i.e. go to Brazil). Thankfully, that is what I did.
Fortunately, B.R. Sankeerth, a future Canadian superstar also decided to go down to play the tournament, which meant that we could both play a second event together, and it made sharing accommodations easier as well. So we all ended up having 2 events each, and training at the tournament was a lot easier with 3 people. It was a long trip down to Brazil for me, as I went from Vancouver to Newark to Sao Paulo to Foz Do Iguacu, but I made it in time for training the day I arrived. I definitely slept well that night.
The tournament was quite small, but there were small teams from Belgium, India, and Germany. There were other countries competing as well, but the draw size was quite atypical for a Grand Prix level tournament. Rachel and I were seeded 2nd in the Mixed Doubles, but we were at a World Ranking of about 170, while the top seeded Indian Team were probably ranked about 65-70, so about a 100 World Ranking difference between the seeded teams. The tournament ran smoothly on only 3 courts.
In the doubles, Sank and I played against Germany in the semifinals, but had a lot of difficulty against them. I would guess combining a Singles and Mixed player together isn't the best combination for Men's Doubles. Regardless, I would like to thank Sank for playing doubles with me and getting a bronze medal together! #CheddarSank #KnockKnock
In the mixed, Rachel and I played against Germany in the semifinals as well, but this time, we were able to win in 3 games! In the final, we tried our best against India, but we had more difficulty against their style of play. We ended up losing in straight sets, but I am still pretty happy with our performance overall and I think this is just the beginning of a great partnership! Additionally, it feels a lot easier to play without the stress of Olympic qualifications, which is a considerable factor. However, I definitely must compliment Rachel for her work ethic on court and her mental toughness. It makes her very adaptable to the way I play (let's just say I even confuse myself sometimes), and she can cover me when I gamble on certain shots, which allows me to take more chances. It's nice to get that extra bit of freedom on court and I'm excited to see what we can do with a bit more time playing together!
The tournament went pretty well for all of us, and none of us left empty handed. Rachel had a 3 set match with the #1 seed in her Singles semifinal, but failed to defeat the eventual winner of the tournament. Still, I am proud of us for making the podium 3 times (WS, MD, XD)! Afterward, we had a chance to visit the infamous Iguazu Falls (on the Brazil side). Although we got pretty drenched, we had a pretty good time, including Rachel doing her 22 Push Up Challenge with the waterfall in the background! Now, that's "LIT"! #insidejoke 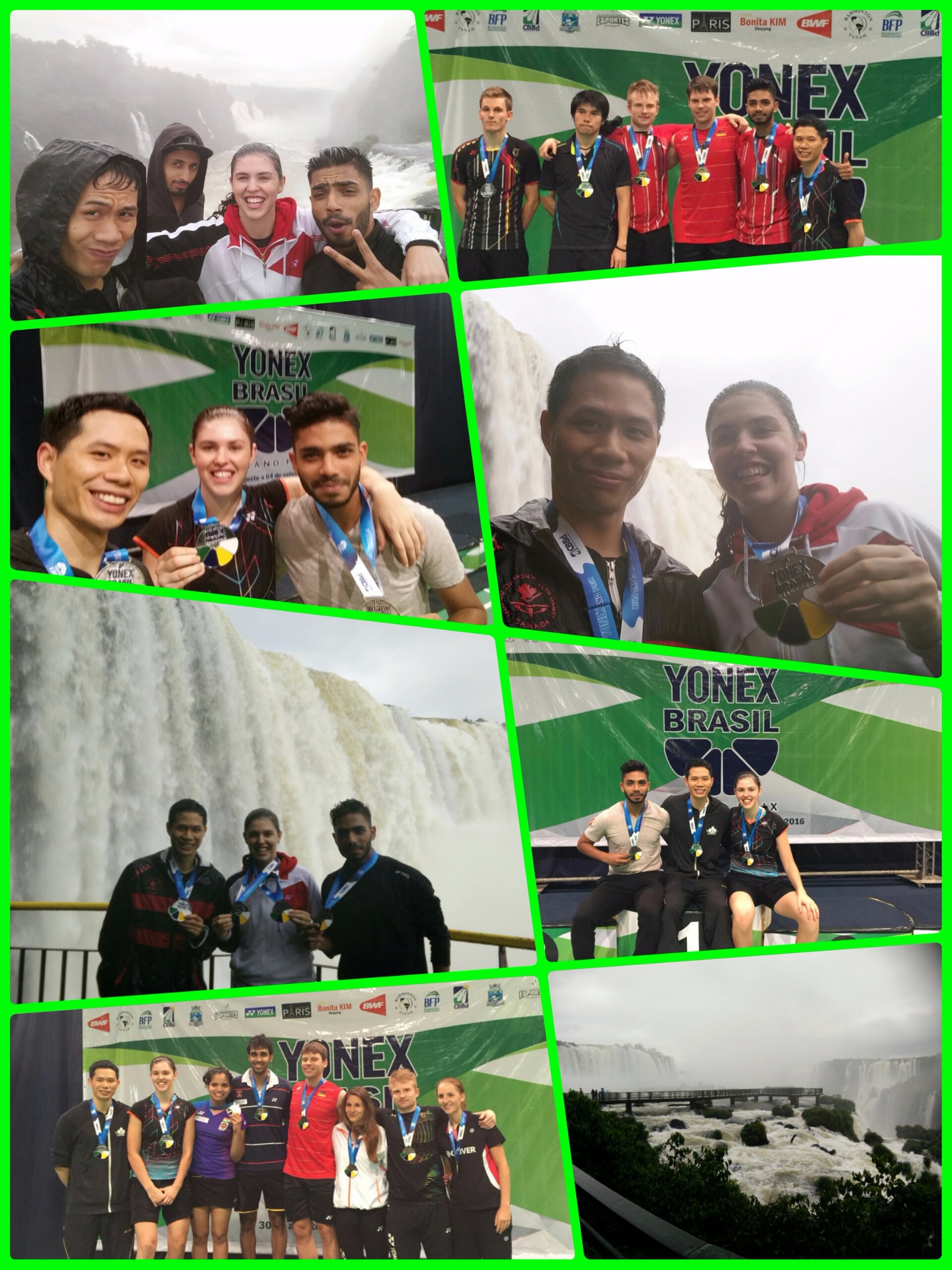 Now that I'm home, it's time to plan out the next little while. I know some people believe that you need to have direction in life. They believe you need to keep your mind set on that vision in order to achieve it. But I'm not like that... I know I can't chase perfection, so I will settle for progress. "Progress. Not perfection." Cliche? Probably. Redundant? Possibly.
Maybe it's not like the song at all. Maybe I am chasing a waterfall. Staring at the massive Iguazu Falls, I can't help but wonder if it's just easier to go with the flow. Take the easy way out and "stick to the rivers and the lakes". But no... as a new mantra, "The obstacle is the way".
Besides, Bruce Lee said, "Be water, my friend."

You may also like Is This The End Of The Story… Or Will There Be Part III?
Share this article
Back to Home